Well folks, it may have been 39.6C yesterday but we both still had a wonderful Christmas day at C  & M's home.  They were able to have their airconditioning repaired on Christmas Eve which of course made it so much more comfortable and a strong sea breeze came in about lunchtime which made it a tad better as well.

There were 11 of us that sat down to Christmas lunch (the baby was asleep) and a delicious meal it was too.  Turkey, ham, pork, prawns and of course some great salads.  An hour or so later we had tiny cheese cakes and a really super trifle.  Couldn't have asked for anything better.

You would love our 3 great-granddaughters (actually your great-great-granddaughters).  CT at 16 is just such a loving girl and always a pleasure to be with.   Immy is quite the little miss at nearly 5 and knows just what she wants and when she wants it. She loves to sing and dance and she got the most gorgeous fairy outfit for Christmas and looked so beautiful wearing it.  Little AJ is so precious and one of those happy babies that makes you feel good just watching her antics.  As C & M were living in Sydney when Immy was small we of course didn't see much of her, except on fleeting visits to Perth, and I feel we missed so much because of the distance between us, but that's life I guess.

The drive there and back to C & M's is takes over an hour but all the drivers were well behaved so no hassles at all.  It was hot in the car but the airconditioning made it bearable.  I often wonder how I managed to drive home from work each day in the 1970s/1980s right into the afternoon sun with no airconditioning in my Escort.  I guess I was much tougher then.  Can't live without it now.

So, another Christmas has come and gone.  I drank a silent toast to those no longer with us, of whom these days there are many.  I tried to remember family and friends, including yourselves of course, and there are so many precious memories that I am so fortunate to keep close to me.

Love you
xxxxx
Posted by Mimsie at 8:08 PM 4 comments:

Email ThisBlogThis!Share to TwitterShare to FacebookShare to Pinterest
Labels: Christmas...a delightful day had by all

CHRISTMAS IS ALMOST UPON US

Only 4 more sleeps, as the children say, and it will be Christmas Day.  Phil and I have had trouble getting into the Christmas spirit this year but we have finally finished the shopping and I have sent our last Christmas card by mail.  Lesser friends receive electronic greetings these days and they seem to enjoy receiving them which is great.

We are both a wee bit exhausted but hopefully we have remembered everything we had to do.  Food shopping has been done as well and as it is only for the two of us so no big deal.  Simple meals for hot days.  Believe me we are in for a very hot week with 39C on Christmas Day forecast.

I understand we are going to C & M's for Christmas lunch although nobody has actually told us what the plans are yet.  Still the family are a wee bit like that and I am sure we will hear all about it in plenty of time.  We are really looking forward to it as the past few years have been really wonderful and now of course we have our third great-granddaughter to share the day with. 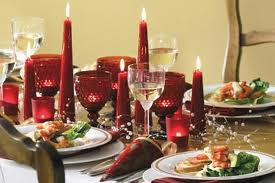 These days we are pretty well excluded from having to do much except perhaps provide serviettes, crackers and perhaps take a salad or two.  It is nice to be able to sit back and let others do the main catering after all these years. I am sure we will hear in plenty of time what our designated tasks are.  None of the family seem to enjoy Christmas pudding or cake so we have a small one for ourselves at home on Boxing Day.  Just have to have Christmas pud with custard and cream at this time of year.

I am beginning to understand why we always were away on holidays from Christmas Eve and I am thinking what a lot of work it saved you both.  No decorations to up at home or meals to plan.  Plus we all had a wonderful time with the same people year after year at Mandurah House.  Oh, life seemed so simple then.  Not like the mad rush it always seems to be for everyone these days with not a second to sit back and enjoy life as we once did.

You will be missed at Christmastime as you always are and I will drink a silent toast to you both at the same time remembering all those wonderful holiday Christmases we shared for many years.

Love to you both
xxxxx

Email ThisBlogThis!Share to TwitterShare to FacebookShare to Pinterest
Labels: Nearly Christmas....just made it...

I address this to you because Dad had left this mortal coil some years before your #3 great-granddaughter arrived on the scene.

You'll never guess but that g/granddaughter has gone to Alaska on a 2 year work visa which I believe can be extended if she so chooses.  It was quite a big thing when I went over to Melbourne in 1950 to work but these days the young are departing for all parts of the globe.  B has a girlfriend over there with whom she will be living and working for/with her friend's father.

She was so excited to be going after having contact with her friend for two years and I think they are really enjoying being together.  We had a farewell up at her mum and dad's house and took family photos which will long be treasured.

These days you can keep in touch through computers using what they call email where you write messages to each other any time you want (the old system of writing letters is now referred to as 'snail mail') although people do still write letters and send greeting cards to each other.

There is also a way of using the computer through a system called Skype where you can talk to each other through the computer from anywhere in the world and it doesn't cost anything.

This would all seem quite unbelievable to you and believe you me a lot of it is quite unbelievable to me as well and I often gasp in amazement at the way modern technology is advancing, much too fast for me in fact.   I now also have Skype (K set it up for me and I've actually spoken to her through our computers).  Problem is for some reason the camera on my computer is not working and although I could see K (oh yes, you can actually see each other as well) she couldn't see me which is probably no loss.

Owing to all this modern technology we won't have to wait for letters to come from Alaska but will know day to day just how B is faring as she gets set up for her new job and gets used to the cold weather.  She discovered snow for the first time last week but has also discovered its downfalls too and what it is like to be really cold.

We are all wishing her well and K and I are somewhat envious that she will be enjoying a white Christmas while we over here will probably be sweltering.

Talk to you again soon
xxxxxxx
Posted by Mimsie at 6:09 PM 4 comments:

FEELING A BIT DOWN

Hi there again Mum and Dad

I am feeling just a wee bit fed up with me right now.   The arthritis is a real pain (not joking either) and recently I have been having attacks of vertigo, the last one of which lasted up to about 8 hours.  I recently saw an ENT specialist (boy do they know how to charge) and after doing some tests and asking lots of questions he feels I perhaps have Meniere's syndrome!  Funnily he didn't ask me if I suffer from tinitus and I forgot to tell him I have for about 20-25 years!

Do you remember that is what Len suffered from and how ill it used to make him?  Apparently it is rare for it to begin with someone of my age but I guess I've always had strange things happen so why not this?  I am hoping that as it has occurred late in life it will perhaps take a long time to advance as I'd hate to be as ill with it as Len used to be.

I see the specialist again in about 4 months time when he said he will give me a definite diagnosis but not sure exactly how he will do that.  Until then I just hope the vertigo attacks don't come too often  I mustn't speak too soon.  It is well over 2 weeks now since the last one so fingers crossed they will get less over time.  Hope that's not too much to wish for.  What is it they say?  "Always be careful what you wish for!"  With Christmas only 18 days away I'd like to stay reasonably fit until at least then.

Sorry to have a grizzle but sometimes it's difficult not too.  I guess with the arthritis, diabetes etc. it just sort of gets to me at times.

Email ThisBlogThis!Share to TwitterShare to FacebookShare to Pinterest
Labels: ...feeling a wee bit fed up with me
Newer Posts Older Posts Home
Subscribe to: Posts (Atom)

Mimsie
I am 88 years of age, having been born in 1932. I am a wife, mother, grandmother, great-grandmother and a bit of an all round twit. Over the years I have done quite a lot of family genealogy and unearthed some family secrets which has been great fun. I am married to a great husband (second time around has worked for me); I have a daughter and a son, four granddaughters and two grandsons, and five great-granddaughters plus a lovely step-great-granddaughter in New Jersey whom I have never met although I have seen her on Skype. I have had two total hip replacements (June '08 and January '09) but as I have an extremely bad back (neck to tail) and a knees that won't behave, I still can't get about very much so am a stay at home. Maybe that is why I decided to take this drastic step and begin my own blog. Will I keep it up? Goodness alone knows, only time will tell but here goes anyway. I don't have a lot of followers but those I do have are very precious to me.