I FOUND THE STORY OF THAT FORCED LANDING IN 1943

Do you remember when Len was on loan as an aerial photographer to the USAAF in Darwin in 1943 and they had to make a crash landing after that air raid on the Borneo oil fields held by the Japanese when they were chased off course by Japanese fighters?  Well, I was browsing the internet the other day and would you believe I found a website which told the whole story.  There were even photographs and I remember you having photos too but for some reason I don't have them.  Did you, Mum, perhaps give them to someone else in the family?  The main photos I remember were the crew of the "Shady Lady" and the one where the crew and the aborigines that came to their aid were standing beside the crashed plane: 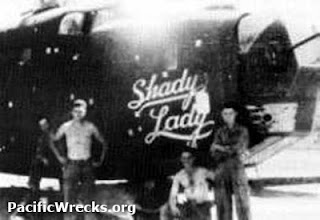 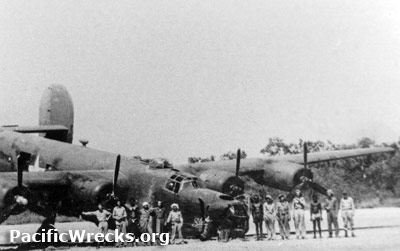 If I remember correctly that is Len on the far left of the above picture leaning on the engine of the plane.  I noticed on the website you can obtain copies of photographs so perhaps I will try and do just that as it would be great to have them for the family album.

The story tells of how they set out at 05.00am on 13 August, 1943 from Fenton Airfield south of Darwin on a bombing mission against the oil refineries at Balikpapan (I have confirmed that was in Borneo).   The B24 was armed with six 500lb bombs and overloaded with fuel.  At the time, this was the longest bombing mission of the war that would cover a total of 2,700 miles.

"Shady Lady" was the last bomber to arrive over the target, as the results of the raid had to be photographed (by Len of course).  On the return trip the bomber encountered thunderstorms which blew the plane off course and forced them to overly Timor and they were intercepted by two enemy fighters that attacked for over two hours and most of the machine guns were inoperative.  Evading the fighters also consumed precious fuel.  (That bit about the machine guns doesn't sound very good).

Extremely low on fuel the bomber force landed onto the tidal salt flats on the Anjo Peninsula, near Drysdale (now Kalumburu) Mission and during the landing the nose gear collapsed and the nose turret fell off.  The crew was unhurt "aside from the "Australian Ruston" who suffered minor injuries".  (From what Len told us they had all gathered at the rear of the plane as it was considered it would be safer but when the plane nose collapsed they all slid down to the front and Len ended up under the pile of men and suffered a bloody (if not broken) nose.

The crew fortunately all survived and used their radio to contact Darwin, and the next day three aboriginals arrived at the crash site and took the crew towards water to the southeast.  Eventually the Drysdale mission lugger travelled down river to the crash site and transported the crew to the airfield at Napier Broome Bay and then trucked back to Drysdale Mission.

The plane was repaired and flown back to Fenton airfield and then on to Garbutt Airfield near Townsville but despite extensive efforts to repair the bomber it was salvaged for parts and then scrapped.  Officially, the bomber was written off the day of the crash landing on 14 August, 1943.

I know I was only 11 at the time but I remember clearly Len telling us about it when he came home on leave but he didn't tell us many of the details I have just learned about.  I do remember him telling us that the American airmen were awarded a Purple Heart each for their part in this particular air raid but as he was an Australian he couldn't be awarded this honour.  Instead he received a personal letter from General McArthur thanking him for his part in the mission.  I often felt that meant more to him than had he received a medal.

All I know I was so glad my brother survived to tell the tale and I was excited to read so much about an event of which he was so much a part.

Email ThisBlogThis!Share to TwitterShare to FacebookShare to Pinterest
Labels: History from the past...wonderful to discover it now
Newer Posts Older Posts Home
Subscribe to: Posts (Atom)

Mimsie
I am 88 years of age, having been born in 1932. I am a wife, mother, grandmother, great-grandmother and a bit of an all round twit. Over the years I have done quite a lot of family genealogy and unearthed some family secrets which has been great fun. I am married to a great husband (second time around has worked for me); I have a daughter and a son, four granddaughters and two grandsons, and five great-granddaughters plus a lovely step-great-granddaughter in New Jersey whom I have never met although I have seen her on Skype. I have had two total hip replacements (June '08 and January '09) but as I have an extremely bad back (neck to tail) and a knees that won't behave, I still can't get about very much so am a stay at home. Maybe that is why I decided to take this drastic step and begin my own blog. Will I keep it up? Goodness alone knows, only time will tell but here goes anyway. I don't have a lot of followers but those I do have are very precious to me.