I was going through some very old photographs yesterday and I came across this one of you taken sitting at a desk in the Citizen's Advice Bureau in Murray Street, Perth. 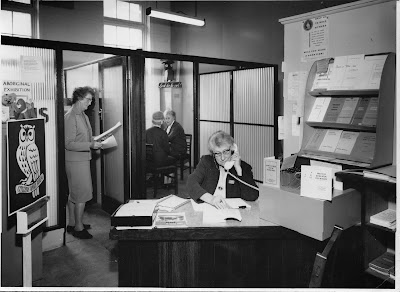 I know that wasn't actually your desk (as you had your own office) but the photos were taken for a journalist who was writing an article for The West Australian or The Sunday Times (I forget which now) newspaper about the Citizen's Advice Bureau which you first started in 1962.  I recognise Muriel Haning (on the left) who was your loyal secretary until your forced retirement as CAB Director after that fearful accident in 1973 when you were nearly killed by that wayward car driver.

I remember you actually began the CAB in a tiny office in what was one of our largest department stores, Boans (long ago taken over by Myer who decided not to continue with the household name we all knew so well), when Mr Harry Boan thought the idea of a Citizen's Advice Bureau based on those in England would be a good idea for our city.  Nobody could imagine how well the idea would take off and yet you developed it into what it has become today.

I think people doubted whether the CAB would be able to continue in Perth without your leadership, but thrive it did and you would be so pleased to know there are now branches throughout Western Australia.  There are five branches in the metropolitan area and also four in the country, as far away as Albany, Busselton, Bunbury and Mandurah.

I am so proud of you for all the wonderful social welfare work you did over many years and this is certainly one of which I am extremely proud because of the wonderful assistance it gives to people.

You may be interested to know that I was invited to a luncheon held in a Perth hotel several years ago (just because I was your daughter would you believe and had information about the formation of the CAB they were pleased to have) to celebrate some anniversary (perhaps 40 years?) of the CAB.   I asked Karen to come along as my guest as she loved you so much and was also very proud of you. When we went in would you believe we were ushered to the table at the front of the room where the VIPS were seated.  It was a wonderful lunch and they asked me to draw the raffle they were holding to raise money.  Hats off to you Mum.

Email ThisBlogThis!Share to TwitterShare to FacebookShare to Pinterest
Labels: Another proud moment thinking about my mum

Mimsie
I am 86 years of age, having been born in 1932. I am a wife, mother, grandmother, great-grandmother and a bit of an all round twit. Over the years I have done quite a lot of family genealogy and unearthed some family secrets which has been great fun. I am married with a great husband (second time around has worked for me); I have a daughter and a son, four granddaughters and two grandsons, and three fantastic great-granddaughters plus a lovely step-great-granddaughter in Alaska whom I have never met although I have seen her on Skype. I have had two total hip replacements (June '08 and January '09) but as I have an extremely bad back (neck to tail) and a knee that won't behave, I still can't get about very much so am a stay at home. Maybe that is why I decided to take this drastic step and begin my own blog. Will I keep it up? Goodness alone knows, only time will tell but here goes anyway. I don't have a lot of followers but those I do have are very precious to me.